Mets and DeGrom agree to 5 year/$137.5 million and just in time too 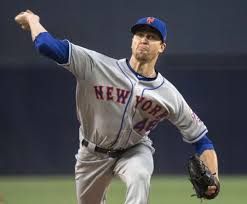 On Tuesday the New York Mets finally were able to reach an agreement with their ace Jacob DeGrom on a 5 year/ $137.5 million contract extension. That’s definitely a step in the right direction for new Mets General Manager Brodie Van Wagenen who is showing that the Mets are willing to sign their own players while they are still in their prime and not just expensive free agents who are on the tailend of their career.  The contract negotiations had been ongoing throughout the offseason with DeGrom even threatening to not report for Opening Day if he felt that the Mets wouldn’t offer him a respectable contract. The last thing the Mets needed going into this season was the head of their rotation sitting out as a form of protest due to contract negotiations.

This year the Mets will be hoping to return to a more respectable team both in the National League East Division and the National League as a whole. The strength of this team is obviously their starting rotation which features Noah Syndergaard, Zach Wheeler, Steven Matz (who I think is a good bounce back season candidate) and the ever present but always on a different team each season, Jason Vargas behind DeGrom. Their offense has the potential to be above average if Michael Conforto can hit for a higher average while still putting up between 25 and 30 home runs and if Pete Alonso, their top prospect, can produce at third base.

One of their big question marks is the health of Yoenis Cespedes, which is already sidelining him at least until mid- June or July after 2 separate heel surgeries last fall. Along with Cespedes, Todd Frazier, Jed Lowrie, and Travis d’Arnaud are also dealing with injuries that range in severity. Frazier and d’Arnaud seem like they won’t be on the disabled list too long while Lowrie is expected return is currently unknown as he heals from a knee injury.

Another interesting story for the Mets is Robinson Cano, he was suspended half of last season after testing positive for PED’s but when he was on the field for Seattle he was highly productive. I’m not sure if his positive test was just an anomaly or if all the years he spent putting up All- Star caliber seasons in the Bronx and subsequently Seattle were not solely due to his natural abilities. He has had a great spring for the Mets and seems to be in better physical shape than the past couple of spring camps. He’s 34 but he’s certainly a good option for them at 2nd base until a prospect is ready to take over for the future.

I think if the Mets can stay healthy and their offense can produce consistently throughout the year, they have a chance to reach the playoffs as a wild card team this season.