The first game for Sunday features the oldest combined age for starting quarterbacks in a divisional round match up. Between Philip Rivers (37) and Tom Brady (41), there are 23 combined playoff appearances, 22 Pro Bowl selections and 891 touchdowns thrown. That right there should be enough incentive for fans to get excited for this game. The Patriots are not as heavily favored as they have been in years past.  It seems they have slipped from their pedestal this year to an 11-5 record as opposed to the norm of 12-4 or better in recent years, but they were still able to grab a bye week. That’s mostly due to the division they play in which offers no real competition on a regular basis.

Brady’s seasonal numbers dipped slightly from last year as he finished shy of 30 touchdowns and also threw 3 more interceptions this year. Usually one of his best receivers, tight end Rob Gronkowski had a significantly down year, catching only 47 passes, 3 of which were touchdowns. However, whenever the playoffs arrive you can bet the Patriots will be in them regardless of how they finish down the stretch of the regular season. Brady has managed to lead the Patriots to the playoffs in 16 of the 18 seasons he has been the Patriots starting quarterback, only missing the playoffs in his first full season (2001) and the season where his ACL was broken in the first game of the season which took him out for the rest of the year (2008).  So, as long as Brady is behind the center, you can bet the Patriots will play in at least one game each January.

On the other side, you have Rivers who, although he has been one of the most consistent quarterbacks in the league over the past 13 years, hasn’t always had the talent around him to highlight how good he really is. The Chargers have only reached the playoffs in 6 of those 13 years.  Their lone playoff appearance over the past 10 years came back in 2013, when they reached the divisional round against the Broncos and were defeated for most of the game even though they only lost by 7 points. Since then a lot has changed for the Chargers as a team, but the one constant has been the play of Philip Rivers. He won’t wow you with 30 yards+ passes down the field but he will nickel and dime the ball down the field with slant routes and cross patterns.

The name of the Chargers game is ball control, as they exhibited last week against the Ravens. Through the first 3 quarters of the game, the score was 12-3 due to 4 Chargers field goals. Even when they didn’t score, the Chargers still managed to hold onto the ball for significant amounts of time, controlling the ball for almost 12 minutes in the second quarter alone. If the Chargers can keep the ball out of Brady’s hands long enough, they may be able to leave Foxborough as the hosts for the AFC championship game.

For this game, both teams have all their top players healthy, the players who are listed as questionable are reserves who won’t impact the outcome of the game. 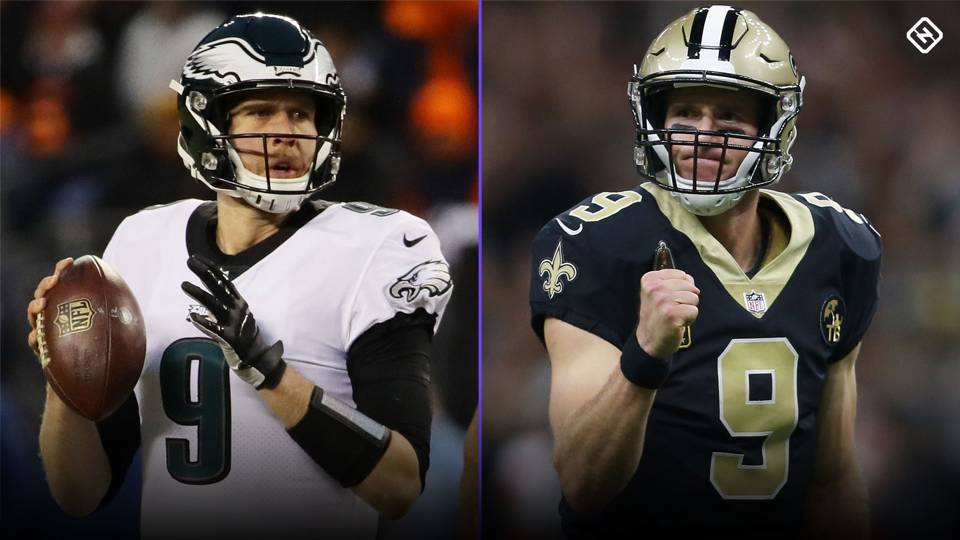 The second Sunday game brings us the Philadelphia Eagles facing one of the heavier Super Bowl favorites, the New Orleans Saints in the Mercedes-Benz Superdome. The Eagles won a crazy game against the Bears that will forever be defined by a missed potential game-winning field goal and an obscure rule which states that if a pass is ruled incomplete by an official, it cannot be reversed as a catch and anything that happens after that does not matter. That rule took away what looked to be a potential scoring opportunity from the Bears toward the end of the first half and ultimately proved to be one of the game’s most significant calls. Meanwhile, the Saints clinched a first round bye back in week 16 in a hard fought game against the Steelers. Since then, they rested the majority of their starters in their home finale against the Panthers and have had a week of more rest and practice to prepare for their next opponents.

Although Nick Foles and the Eagles have been on an incredible role lately, they were at their lowest point this season when they were blown out 48-7 by these Saints back on November 18th, a game that was played in New Orleans. In that game, Drew Brees was almost perfect, passing for 363 yards, 4 touchdowns, and no interceptions. This was also the worst game of then starter Carson Wentz’s season. He not only didn’t throw for a single touchdown, but also managed to get picked off three times. After that game, the Eagles let it be known that they were not out of playoff contention (despite their record being 4-6 and being in 12th place in the potential NFC playoff standings at the time), and they shocked everyone by returning to the playoffs in an attempt to defend their title.

Low and behold here we are, and the Eagles have gotten exactly what they wanted: a chance to avenge the loss they suffered at the hands of the Saints.  The numbers say the Saints will probably have a similar offensive output to the one they had in November. However, outside of that game against the Eagles, the Saints defense has been horrible against the pass, ranking 29th in that category at the end of the season.

There are no significant injuries for either team at this point as everyone who has been listed on each team’s injury report is supposed to be in full uniform for the game, except for Carson Wentz, but everyone should have expected that anyway.

For Sunday’s games, I predict that the Eagles will defeat the Saints by 7 points and continue their quest to repeat as Super Bowl champions. I also think the Brady-Belichik reign of terror will end in quiet fashion as the Chargers win by a margin of 10 points.