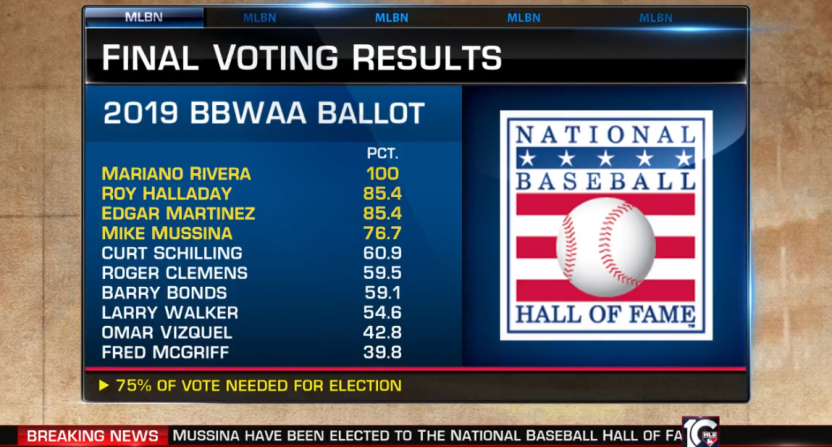 Mariano Rivera was announced as one of the four new inductees to the National Baseball Hall of Fame yesterday. That was a foregone conclusion. The only debate among the baseball analysts was whether he would receive 100% of the nominations, which would make him the first player inducted unanimously. Almost all of the baseball network analysts figured that he would fall 1 or 2 votes short. The voting works by giving each BBWAA member 10 votes to be cast for or against the players of their choice, and it was thought that some would use their votes against, for instance, Barry Bonds or Roger Clemens, or in order to help others reach the necessary 75% for induction (such as Mike Mussina, finally). However, when the inductees were revealed by Baseball Hall of Fame President Jeff Idleson, history was made. At the end of the announcement, Idleson was asked if Rivera had received 100% of the votes. The answer was yes, officially making Rivera the first player to be elected by every writer.

If there is any player deserving of this distinction it is Mariano Rivera. He was a once-in-a-generation type player, and if you were a baseball fan from the 90’s through the 2010’s, you just had to see him pitch at least once to witness his legendary cutter. In case you’ve been living under a rock the past 25 years, Rivera is the current leader in career saves since the save was officially named a statistic in 1969, with 652. He also finished 952 games in total. It seemed that whenever a game was on the line in the post season, the player you wanted on the mound was Rivera (I’m not going to discuss the 2001 World Series or 2004 ALCS because those are not appropriate for this article). In 19 seasons (17 full seasons not counting his rookie year in 1995 and 2012 when he got hurt) Rivera pitched in 15 playoff seasons. He won 7 games, lost 1 and saved 42, he also managed to keep his ERA at 0.70, the lowest total in the past 90 years. In addition to his performance on the field, I have to think that his professionalism and respect for both teammates and rivals, the game itself, and his generosity to fans all helped to dictate his enshrinement.

If you look at any clip of Mariano Rivera after he finishes a game, regardless of the outcome, his attitude doesn’t waver. He calmly shakes his catcher’s hand (Jorge Posada, Brian McCann, Francisco Cervelli, Jim Leyritz, etc), then goes through the obligatory post-game tradition that players have been doing since they were in kindergarten, shaking his teammates hands after a good game. While other players often allow themselves to get swept up in the moment, Rivera usually remained stoic and reserved. Well, unless it was the last game of a World Series Championship the Yankees had just won, but who wouldn’t be excited about that? Rivera always remained calm and respectful toward the opponents he faced after they either struck out or splintered their bats to make the third out of another Rivera save, as opposed to the closing pitchers who make triumphant gestures every time they record a save. I understand the compulsion to celebrate after a hard-earned save, but I always admired Rivera’s humble demeanor.

I was lucky enough to see Rivera during his final season farewell tour in Minneapolis for my high school graduation present in 2013. He had been presented with parting gifts from each team during the Yankees last stop in every city, and I was anxious to see what he would receive from the Twins. I was not disappointed when I saw then manager Ron Gardenhire bestow upon Rivera the “Chair of Broken Dreams”, a rocking chair composed of the broken bats of Twins players who were the victims of his devastating cutter over the course of his career. I also got to see what would be his last 2 saves in a Twins stadium. It was something I will never forget, and to top the trip off Mariano Rivera took the time to sign a baseball for me and countless other fans, as he made it a point to do all season long, and I had the honor of shaking his hand before the first game. 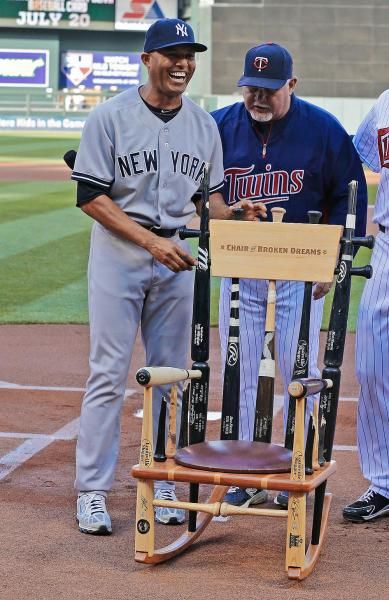